skip to main | skip to sidebar

The glorious final morning of our last day on the boat found us breakfasting with about six members of our tour group. For various reasons, the other members found themselves confined to their rooms with illness. Poor Chester, Susan told us, had barely fought of death’s cold embrace the night before.

After a hearty breakfast of one croissant, I was ready to tackle the day’s challenges. These included a visit to the Aswan high dam and the temple of Philae, which would require us to take a boat out to the island where it had been relocated after the construction of the dam.

First we went to the dam. It was damn impressive (sorry, I love that joke). Having grown up in the TVA region, I have spent a lot of time around these massive edifices, and they are always an impressive reminder of how efficiently man can tame nature and kill salmon all at the same time.
As we stood upon the dam, Wifey made the tragic error of stepping out without looking both ways and found herself almost flattened by a bus. It honked at her, drawing the attention of every single person on the dam, and causing her no end of embarrassment.

I told her to be careful, because she was only insured for about twenty grand, and it’d take me a lot more than that to buy a Playboy bunny to be a naked nanny for our children.

After that it was off to Philae. As we gathered in the boat, several trinket salesmen crowded on as well and began selling their wares along the way. They had a variety of shoddy-looking necklaces, but the prices were good, so I bought some.

What can I say? I love trinkets and beads.

The temple itself is not only impressive for its size, but for the fact that it was moved up out of the water a few decades ago. Pretty cool. We also heard, again, the “won’t you please give to help us save these treasures to humanity?”

I held up the ticket receipt and said “hey, I just gave forty Egyptian pounds!”

The guide thought that was less than charitable.

The temple was most notable for having a crocodile pit, where the priests kept a pet crocodile that they fed and treated as a god, then afterwards mummified and kept in the temple. I took a picture of the deep pit the croc lived in:

How this has not become the centerpiece in a movie about Egypt, I cannot say. Can’t you just imagine the high priest and the hero struggling, only to have the priest fall into the croc pit and get eaten, and have the hero say “I thought you needed to spend more time with your god!”

I mean, can’t you just see Arnold Swarzenegger saying that? 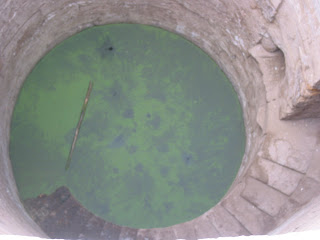 As we returned, our boat was suddenly overtaken by another one with about six vendors hanging off the side. Fearing pirates, or worse hyper-aggressive trinket salesmen, I prepared to do the only noble thing: throw forward one of the other tour members as bait and jump into the water to swim away

Turns out they were lazy trinket sellers who just wanted a ride back to shore. They didn’t even try to sell us anything! Amateurs.

Back on shore we were not so lucky, and found the hawkers on the street in full swing. One of them used a come-on line that was so new I had to stop.

“I know you! We went to school together!”

He nodded his head eagerly, though he was a good twenty years my senior. “Oh, yes sir, it is me! We were in school together!”

“I thought you were an asshole then, too.” I turned and left. I can’t be sure, but I think he pelted me with poo.

In retrospect, I probably deserved it.

After that it was back to the boat, and not a moment too soon, as the heat was approaching 110° F. There we bid a fond farewell to our guide, and had about thirty minutes until the next Naggar travel dwarf came to pick us up at 11:30. 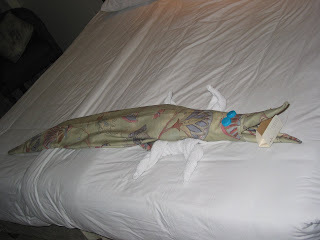 The Closest to a Real Croc We Got

We meet Chester back on the boat, pale of skin and looking about ten pounds lighter. He was in rough shape but had recovered enough to move. And he was still pissed about the whole receipt thing from several days ago, and vowed that whenever the dwarf showed up they’d duke it out over the trip to Abu Simbel scheduled for tomorrow.

Chester promised me he’d be on that bus, but I told him he’d be lucky if he wasn’t on a hearse come tomorrow morning.

We retired to the lounge, and Wifey declared her long-held desire to finally have some of this ice cream from their menu. She told me to go order a chocolate shake for her, and if they didn’t have that, then order vanilla.

However, there was a problem. “We do not have chocolate, sir.”

“We do not have vanilla,” he tells me. Then he rattles off the eight flavors they do have, ranging from strawberry to pecan rattlesnake to camel piss.

What a country! So I ordered myself a strawberry shake and got my beloved wife water. Am I a good husband or what?

Finally the Nagger travel dwarf arrived. Right on time, too, if by “on time” you consider two hours late to be on time. When Tardy finally arrived, at 1:30, we were tired, and hungry, and bored. The boat doesn’t serve you lunch if you’re debarking.

But all was not to be smooth. “Hello,” Tardy told us. “I have come to take you to your hotel.”

All four of us stood, but he shook his head at Chester and Susan. “No, not you. You will be going to a different hotel. I have come to take you to Isis Island.”

“No, Elephantine Island is overbooked. If you go now, the room is very bad. You have a room at Isis Island, it’s very nice.”

I exchanged glances with Wifey, then I made my fateful decision. “Does it cost any more?”

So he took us out of the boat, and I bid what might be a final farewell to Chester and Susan. Yeah, we were booked on the same flight back, but I wasn’t quite sure Chester was going to make it through the night.

When we got to Isis Island, I was impressed. It was a really nice hotel.

Unfortunately, it was full of German backpackers. Smoking German backpackers, who stank like dead hippos and were everywhere with their snaggle teeth and armpit hair hanging out. Not to mention how unattractive the men were. 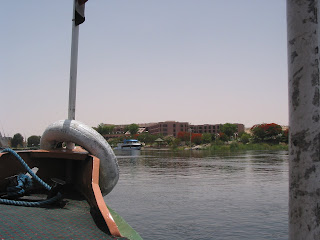 The Isis Island Hotel: Home of the Stinky Backpacker

We hadn’t yet eaten lunch, so by the time Tardy got us checked in, at about 3, I was pretty sure Wifey was prepared to murder somebody. I kept trying to nominate other people, but she kept focusing on me and “this dumbass trip to Egypt.”

But once we reached the room we had two surprises waiting for us: it stank of stale smoke, and the bed was a Queen bad. Hallelujah! Finally no pushing twin beds together!

After we’d approved the room, Tardy decided to try to help us out for entertainment for the night.

“There is a very nice sound and light show at the Temple of Philae. I can get you tickets, if you like.”

“I’m really tempted,” I lied. “But you know, we have to get up so early to go to Abu Simbel, I’m just not sure we can do that.”

“There is an early show!” he suggested.

“I just don’t think it could possibly compare to the Pyramid show we saw,” Wifey said. “So we’ll have to pass.”

“That is true,” Tardy agreed. “The pyramid show is quite good.”

And with that, we were on our own. So we had a forgettable lunch to improve everybody’s mood, and then we went on a brief walk around the grounds of the Isis Island Hotel resort.

I don’t know if you’ve ever gone for a walk in a pizza oven before, but that’s what it felt like. Geez, it was hot. It didn’t take much of that before we decided to go back to the stinky room and watch Egyptian TV. I ended up watching a German show about a Japanese game show. I don’t know what the hell they said, but watching Japanese women fall into pools of slime while the host chortled is good fun in any language.

Overall, we were quite pleased: big bed, room quickly aired out via the large patio, and a nice view of the Nile River as it swept by, and crazy Japanese game-show hijinks. All in all, one of our more pleasant evenings in Egypt.

It damn well better be worth it.

NEXT: What could make us long for the Australian bus of death, and will Chester survive? Stay tuned!

Plebian - this is the most truthful and humorous post ever. No traveler should be without.
Wish I could put the good, bad, and ugly, in such prose. Hope you don't mind, but linked you to my blog that no body reads- but then maybe someone will one day?

I have taken my extended family on 2 of theses trips.I Never left the boat and drank Sakara 2nd time. I was templed out!!! But cautiously told them all - no ice, no salads, nothing to eat I don't give you - and laced it with Immodium, to no avail. But also Lomtoil is a wonder shit stopper. Plus corks with band aids.

Last rip my sister from Canada and her husband I arranged for the NIle Trip, but could not fly from Aswan as Cairo was socked in with sand storm (Khamseen). So travel agent opted to put them on the train. About 12 hours (more like 15 hrs all said an done) got back to my house. Experience I will never forget, as when they ripped me apart as it was my idea for them to do the Nile Trip. After 4 years they talked to me, but only on a really required basis.

Thanks a lot for the compliment, I appreciate it. I've been meaning to get you in my links, but so far haven't done.
I'll give you the same advice on blogging that I got: just keep posting, and people will come. After all, I've been at this for over a year and I'm just barely over forty hits a day.
And a good 20 of those are people searching for "hot naked secretary" or "racoon funeral."

Satire is a sort of glass, wherein beholders do generally discover everybody's face but their own - Johnathan Swift

Links to Stuff I Read

Links to Other Sites

Get Your Dollop Delivered!